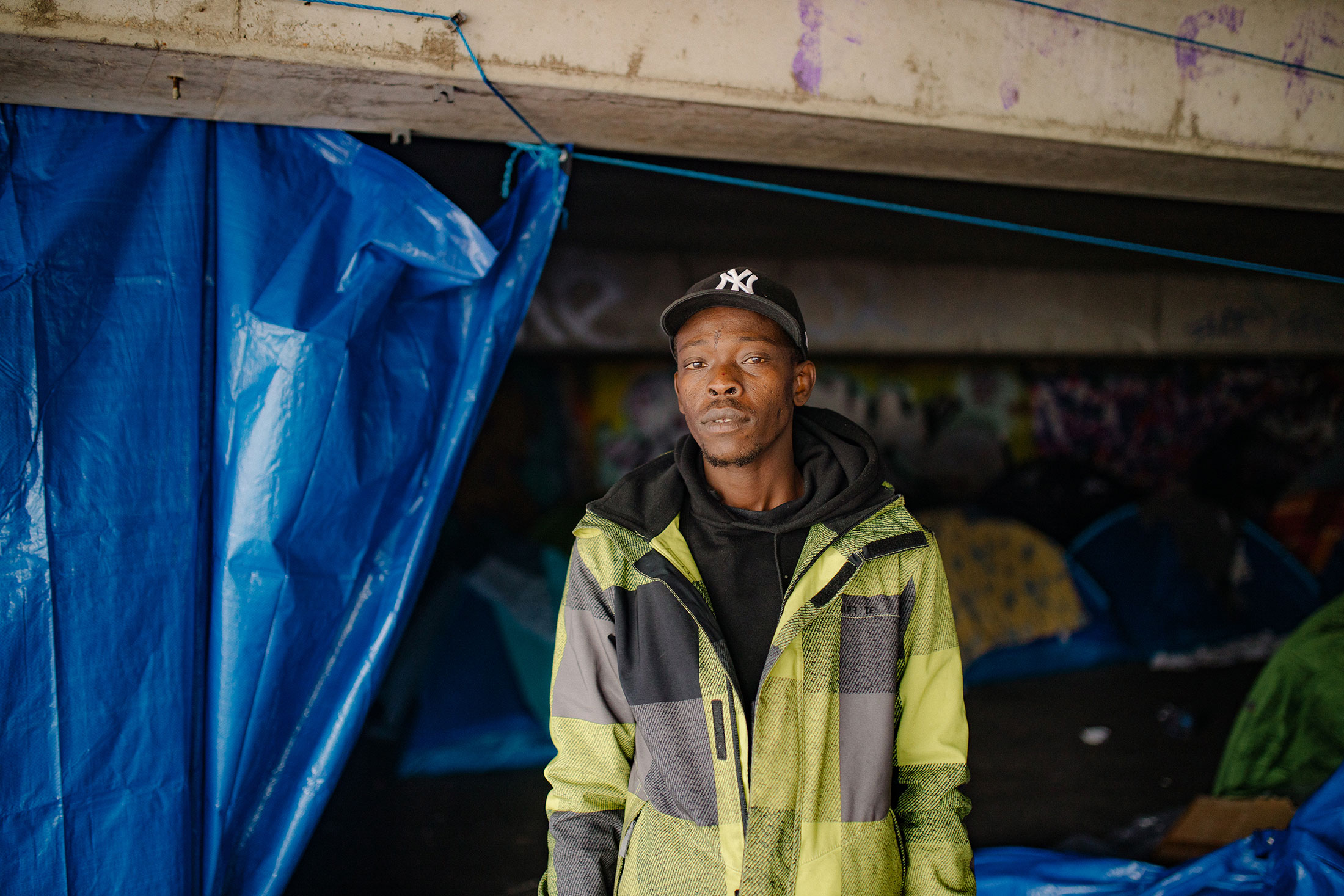 This article was published in Volksnews #16.

This is not your typical Volksnews article where we might usually touch upon subjects in a lighthearted or humorous manner. When we decided to work around the theme of drama for this edition, we couldn’t ignore the human drama that has been present in our own city for so many years. It is all too easy to neglect the sorrow of other people that is hidden in plain sight, and in that we are no different. Now we feel that it is time again to put a spotlight on where it hurts the most.

We are focussing on a group of undocumented refugees in Amsterdam who go by the name of We Are Here. The group came to be in 2012, and since then has moved from one self-claimed shelter to another, in various compositions and group-sizes. Trying to survive. They purposely act as a union — using that, as well as their name — to highlight their presence and their constitutional right to be here as any other human being. They are here, and we cannot keep ignoring that. 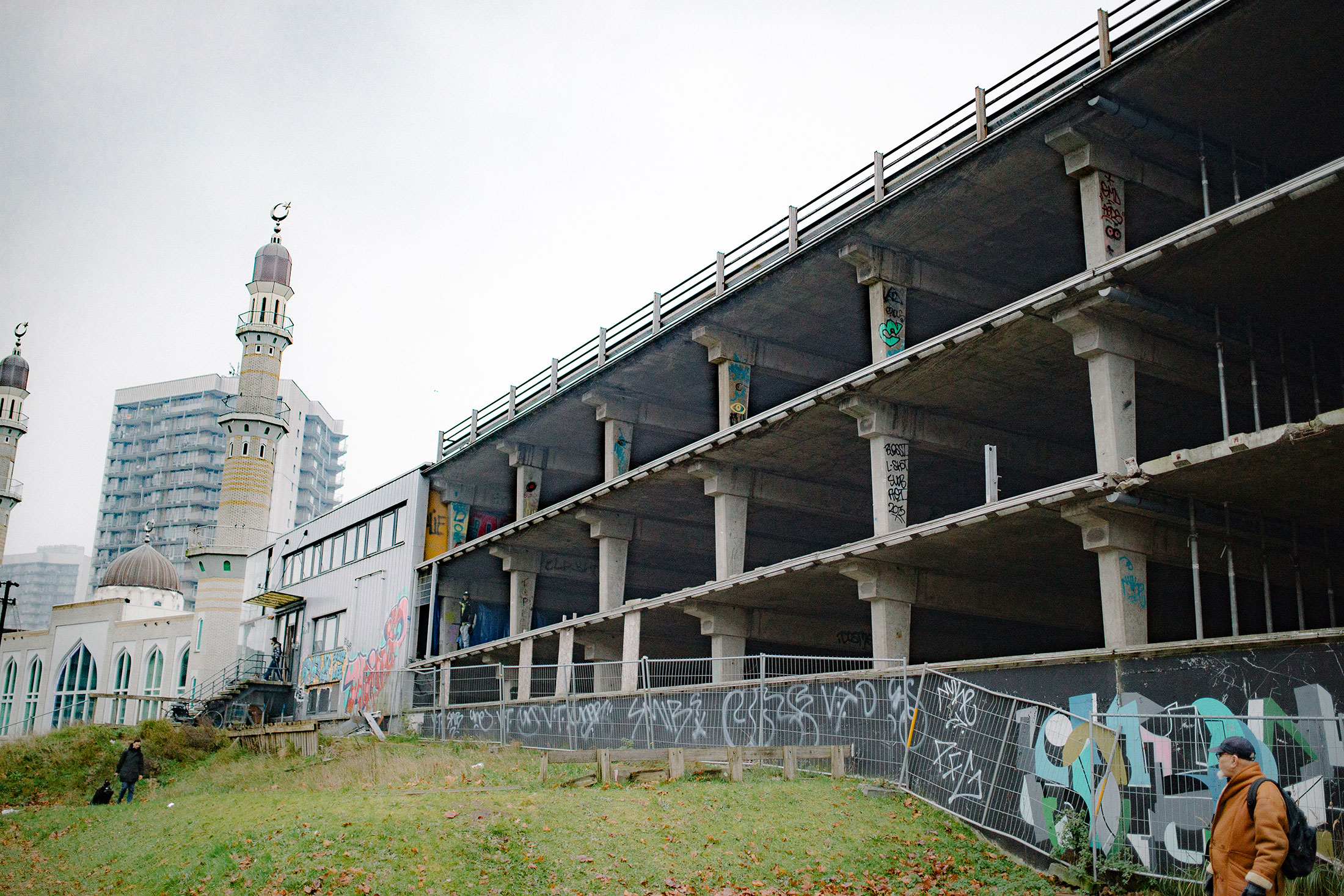 After some back and forth messaging on Facebook I came in to contact with the coordinator of one of the groups that make up We Are Here, his name is Samba. He kindly invited me to come talk at their current shelter, for lack of a better word. Samba and his group are living and sleeping in what is essentially a refugee camp within an open parking garage. The whole place is surrounded with fences, clearly abandoned by society. Together with photographer Tom, we slipped through one of the fences making our way upwards inside the structure. At the second floor we came across a blue wall of plastic sheeting, where we heard soft music and voices. We passed through the sheets, entering a pitch black space filled with tents. We could barely see anything. Somewhere in the middle, people were sitting and talking around a tiny heater. It was Samba and some members of his group; Bob, Biggie, Kiara, Mohammed — to name a few. Samba told us that there were around fifty people living in this makeshift camp which had then only existed for a few weeks. 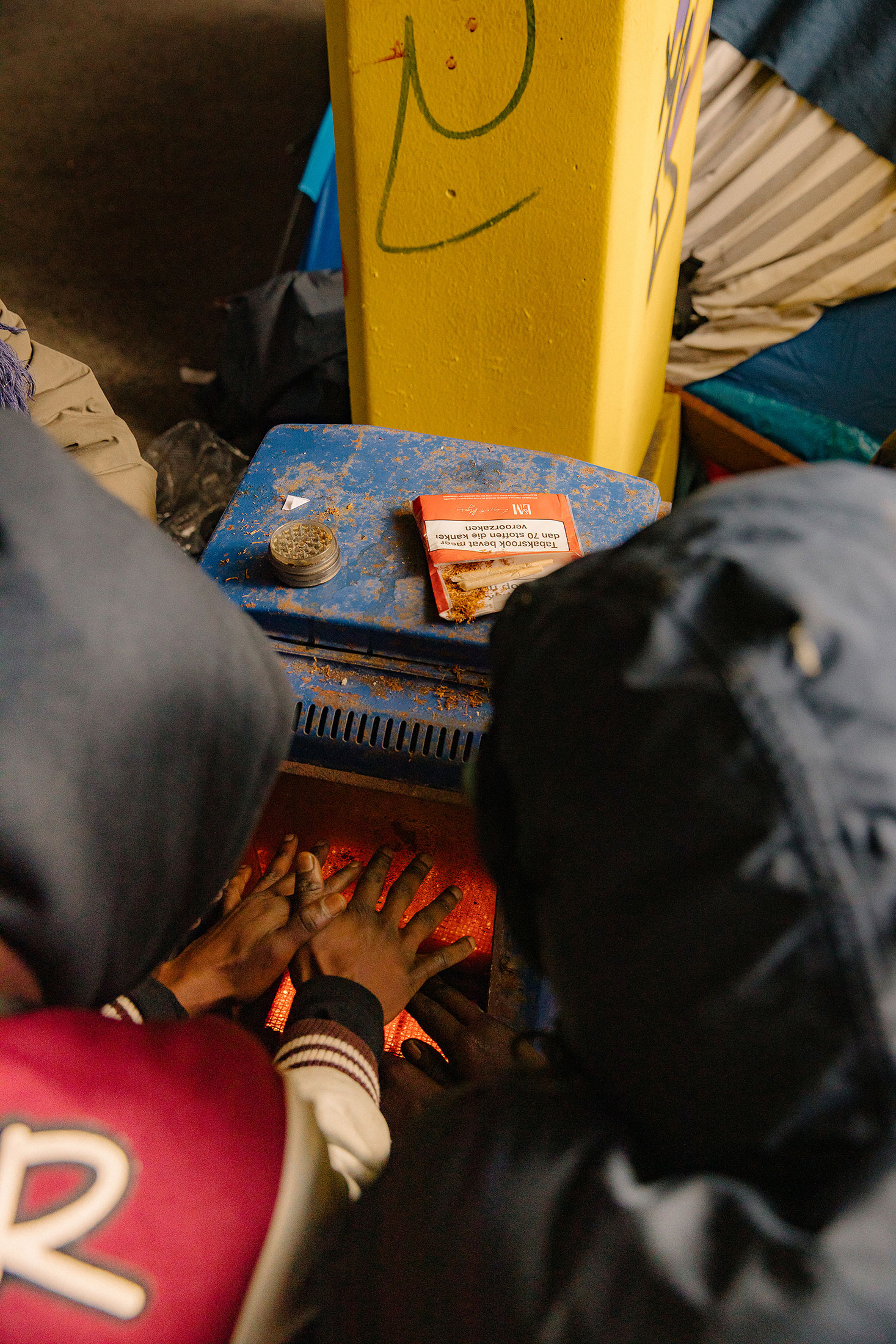 Bob and Biggie warming their hands with the only heater available 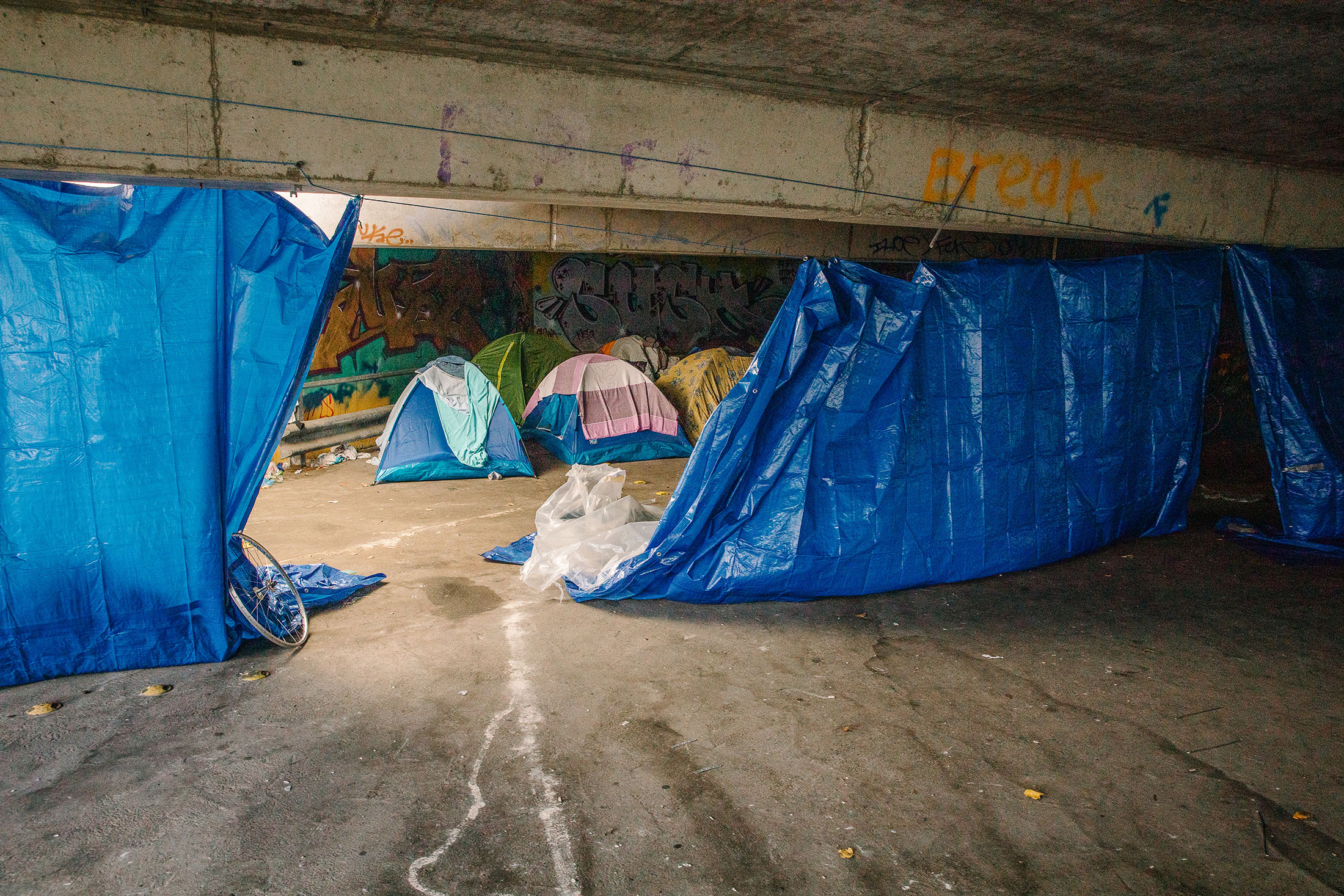 Together, we sat around the small heater as Bob, a young man in his early twenties, began talking. He told us he was originally from Gambia where he went to school and played football. Though he didn’t seem very interested in talking about his old life, I couldn’t blame him. He vividly told us about his disappointment toward a country that has rejected him in every imaginable way. He seemed pained by the fact that we dó take care of our cats and dogs, but weren’t at all interested as to whether he lived or died. The conditions Samba’s group were living in was clear evidence of this, the garage provided almost no shelter from the bitter cold nor the harsh wind; obviously there were no facilities such as toilets and showers. You could only conclude that this place is inhumane, and that this is our fault. Biggie, also from Gambia, told us he had been living as a construction worker in Libya due to unemployment issues in Gambia. When he had to flee Libya in the aftermath of Gaddafi’s downfall, everything was taken from him. Samba explained to us that before refugees are put into boats which cross the Mediterranean Sea, smugglers would strip them of their money, phones and passports. Even if you did survive the journey, you’d enter Europe without any documentation nor any means of survival. The whole group was saddened by the way society perceived their presence in the Netherlands, branding them as criminals and intruders instead of human beings in desperate need. Whenever the We Are Here movement squats a new building, society, politicians, journalists and the authorities only seem interested in evicting them as soon as possible, neglecting the fact that these abandoned buildings are their only available shelter. All they want, is to be able to live a decent human life, and all they need is a society and political system that lets them. Nothing more. Biggie told us he and the others are full of energy, willing to work, if only they were allowed. Whenever possible, he would work in construction again. It was too dark, but I imagine he said it with a smile on his face. 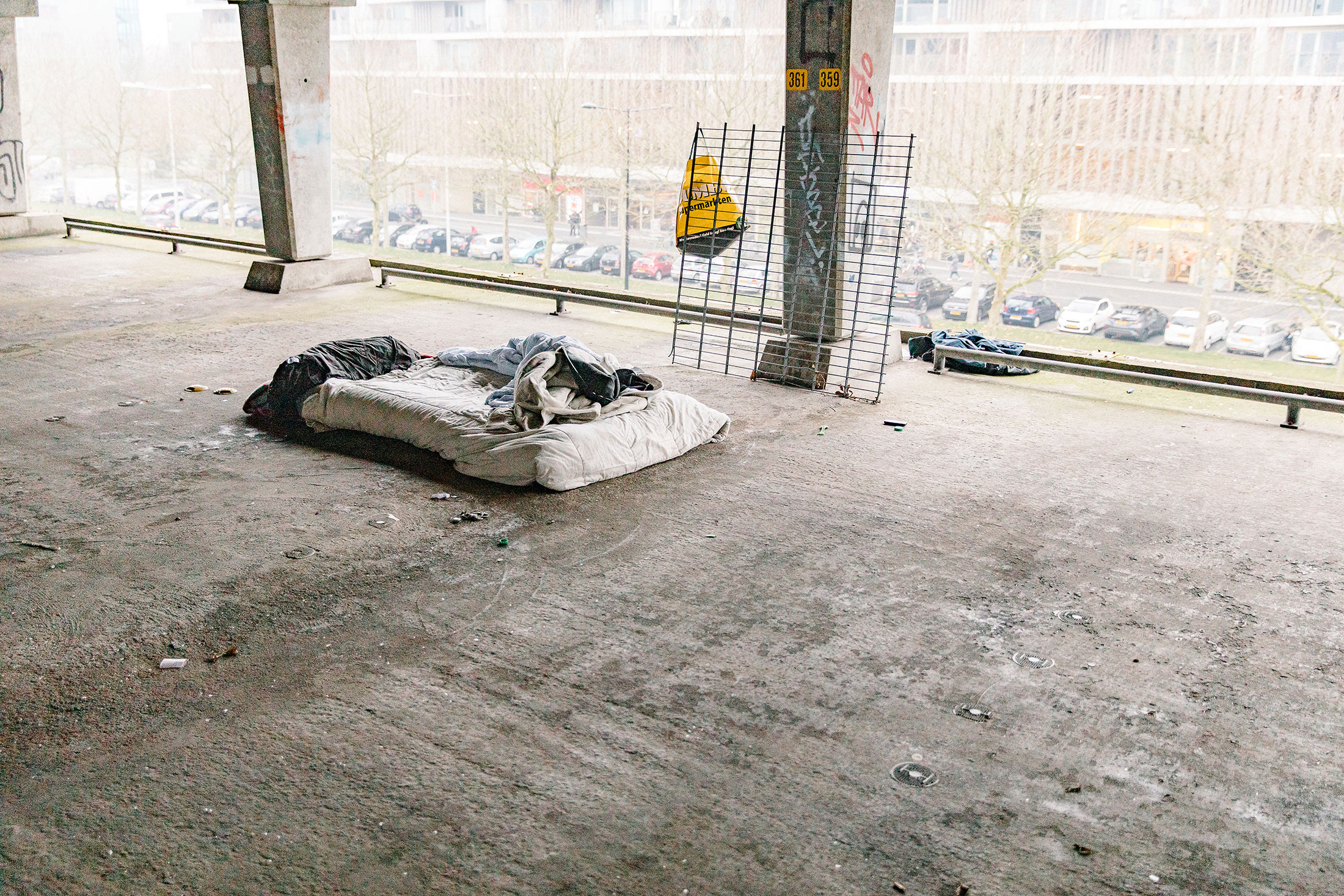 Mohammed entered the conversation, taking us to a broader, more political and historical perspective. Their circumstances cannot be considered in isolation from the colonial past, where western countries took advantage of the African continent, he told us. That past has contributed greatly to their migration. Gambia has been a colonial toy between both French, Portuguese and British powers. Making us collectively — albeit unwillingly — complicit in their current situation. It requires for society to be more open than we are currently. Through solely focusing on the specifics of asylum procedures and upon our own fears, we lose sight of what is so fundamentally important. That these undocumented refugees are humans; desperately in need of dignity, humanity and a perspective for the future. Mohammed described their lives as being in both an invisible and a physical prison, with no way of moving forward or backward. 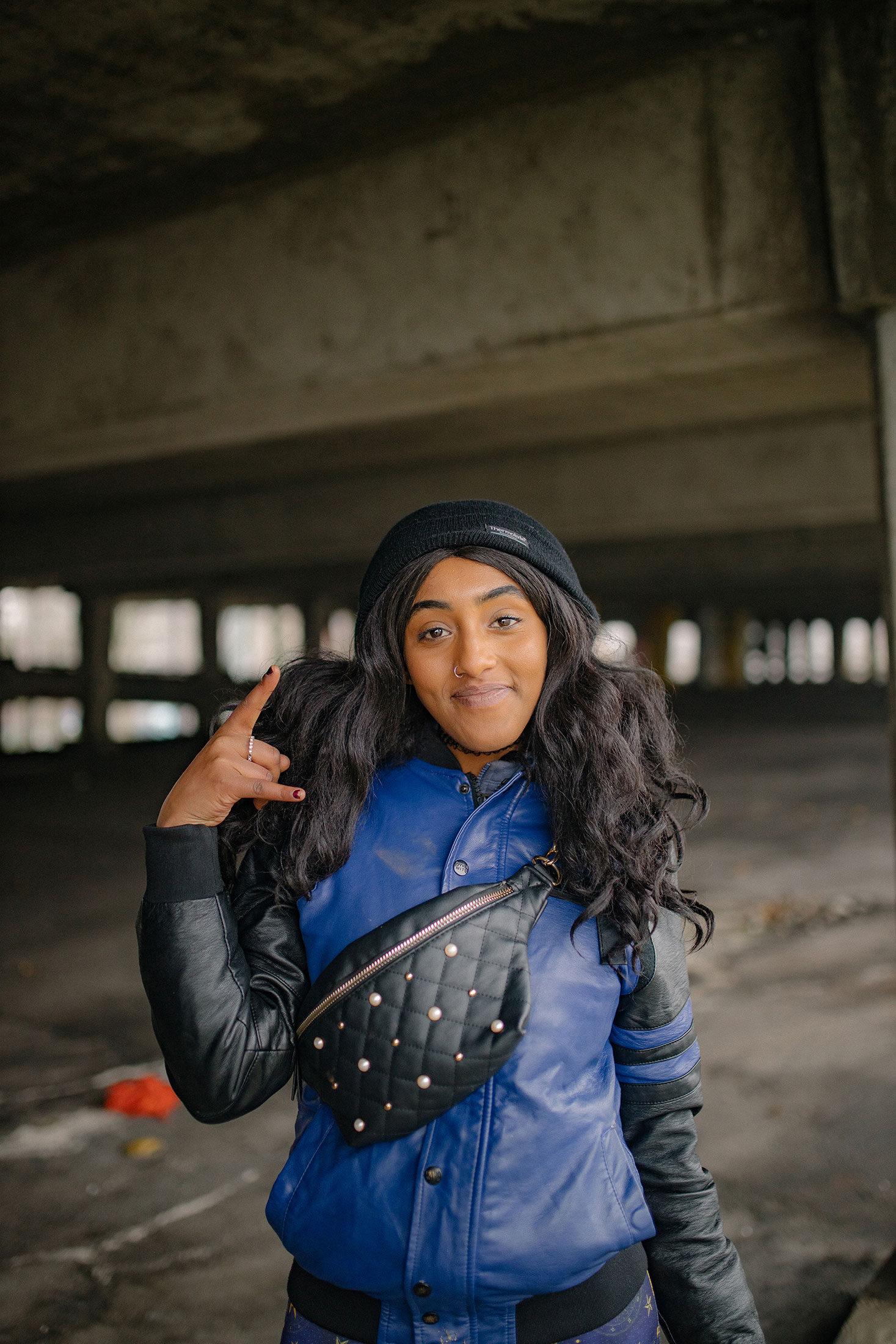 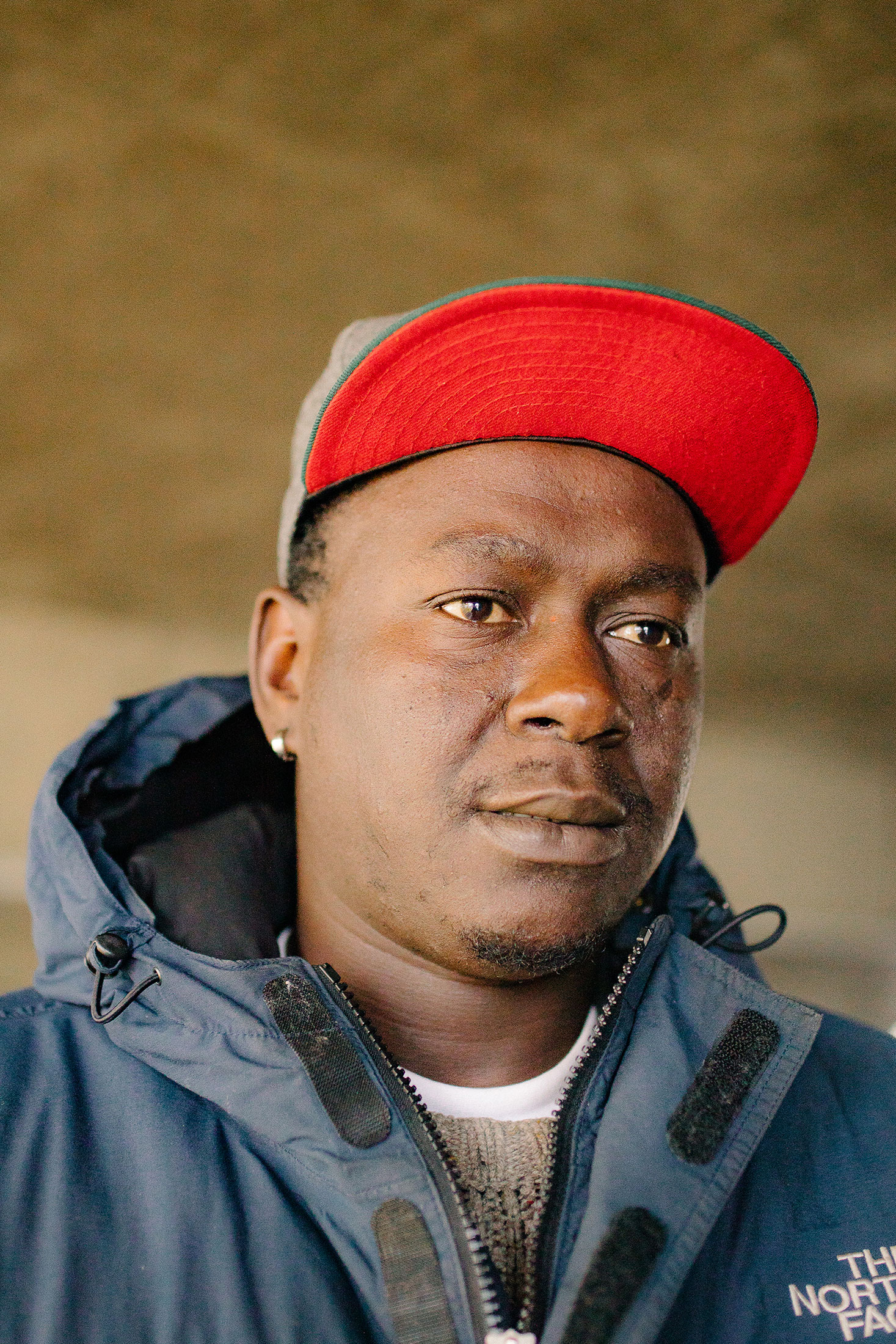 Towards the end, Samba took me further upstairs, showing me beds of people who didn’t have a tent. He became very emotional — angry even — after pointing out a sole mattress that was lying out in the open, without any form of protection. Samba has been living like this for the past seven years, it seemed unimaginable to me. Back home, in warmth, I looked at some of the extremely negative comments people left on their Facebook-page. It hurt, to think that if these people only visited the garage and spoke with Samba and the group — they might think a little differently.

Want to help out? Consider a small donation to the following foundation.